In part 1 of our series, The Ins and Outs of Oracle Enterprise Performance Reporting Cloud Service (EPRCS), we covered an overview of EPRCS and its capabilities in revamping enterprise reporting. Next up, we are focusing on navigating the key reporting elements of the EPRCS user interface. If you are interested in jumping right into creating a Reporting Package, click here.

To recap for those who may not have seen the intro post, EPRCS is Oracle’s application for secure and collaborative reporting. With the same look and feel as the other EPM Cloud applications (EPBCS/FCCS/ARCS/etc.), EPRCS provides a streamlined, systematic approach for defining, authoring, reviewing, and publishing financial, management and regulatory reports. EPRCS operates in a single, cloud environment allowing multiple users to collaborate and combine data to construct an overall report. EPRCS accomplishes this through the use of the “Reporting Packages” feature, which contains the ability to combine data and documents from Microsoft Office, and/or integrate with on-premises software or cloud sources, such as other Oracle EPM applications. Moreover, EPRCS delivers an effective approach to manage the reporting process on a comprehensive & detailed level.

In this blog, we will highlight the key items in the EPRCS user interface what the different icons provide to the end user.

While in the interface of the EPRCS application, a user will notice multiple functionality icons, as referenced in the image below. 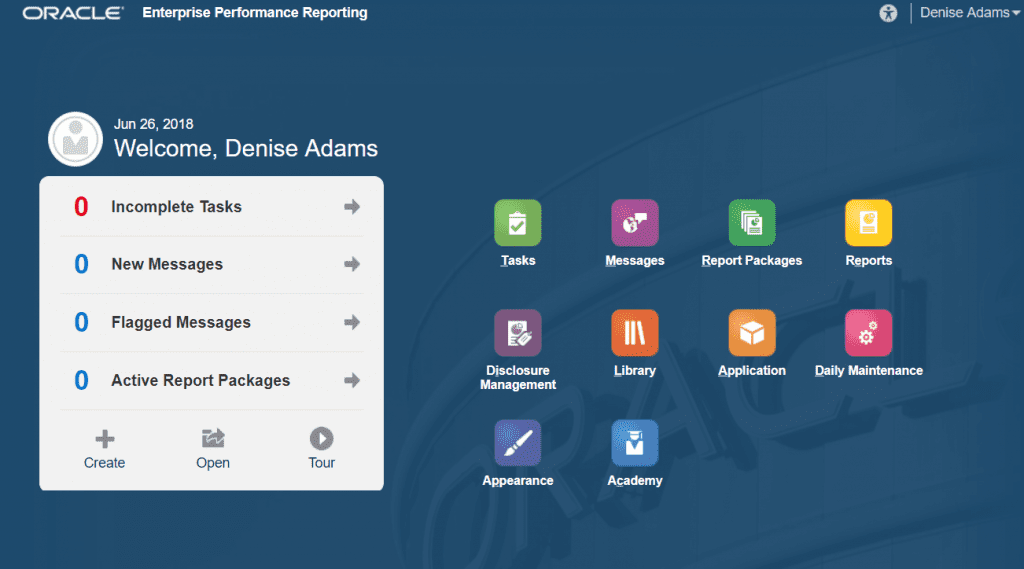 It is important to note that access to all icons displayed above can vary from user to user. A manager or administrator could have access to and control more icons than a lower level user. The main icon’s functions that the majority of users will have access to are described below:

The “Tasks” icon notifies a user of any and all incomplete tasks that have been assigned to them. In addition, if the user is an admin-level user, the Task feature gives them the ability to assign and manage tasks. This feature is advantageous for a manager due to the fact that all tasks are in a singular location with supporting detail, such as, who they have been assigned to, and if they are complete or overdue.

The “Messages” icon is similar to the “Jobs” tab in EPBCS. This function shows users when a task is completed or assigned to them, when a task is overdue, or simply when an artifact is imported or exported in and out of EPRCS.

“Report Packages” and “Reports” allow the user to create and manage reports. The difference between the two is that “Reports” is used for creating a singular report that can be uploaded or created in EPRCS. Whereas “Report Packages” produces a singular report that is comprised of multiple documents. The power of Reporting Packages is that it allows a user to create a report that pulls from multiple documents, such as Microsoft Excel, Word, PowerPoint, and has the ability to be integrated with on-premises software or other cloud sources, such as EPBCS. In addition both features allow the user to upload or edit a report via Smart View. Report Packages is a key functionality for administrators. It allows an admin user to assign a report to other contributors, and prioritize and manage the report as necessary.

The “Library” icon is where the majority of users will go to find all necessary information in EPRCS. Not only can you access all existing reports and reporting packages, this is also where a user will go to connect data sources from a company’s existing EPM Cloud applications (if relevant). Data sources allows a user to connect and pull data from these external sources and allows the user to create grids within their reports that can generate charts or graphs. Users can also create shortcuts to artifacts, and use application-generated personal folders such as Recent, Favorites, and My Library to organize content. You can also create your own folders. After creating the folders, you can grant other users access to them.

Now that you have a good understanding of the process flow of the user interface and how to get to the various information/features, check out the next step – Creating Reporting Packages.

Need some help with EPRCS? Connect with our team today.