Oracle has released its new and improved “Reports” module, which was previously only available within Narrative Reporting, to the Planning and Financial Consolidation and Close business processes in EPM Cloud. Users may begin migrating existing reports to the new module once the 21.02 update has been applied to their environment if they want to leverage the new Reports functionality. Continue reading to find out more about your migration options and our general observations!

Migrate All Financial Reports via “Migrate All” Utility

One of the ways to migrate your existing financial reports is to use the “Migrate All” utility on the Financial Reports tab. 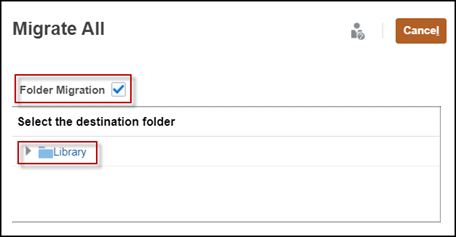 Once you’ve selected the appropriate destination for your migrated reports and/or folders, you will receive a message that the “Migrate Reports” job has been submitted. Head to the Jobs Console to monitor the progress of the migration process.

Once the “Migrate Reports” job is complete, the migrated reports will be available on the new Reports tab. If you selected to migrate folders, your existing folder structure will show on the Reports tab as well. 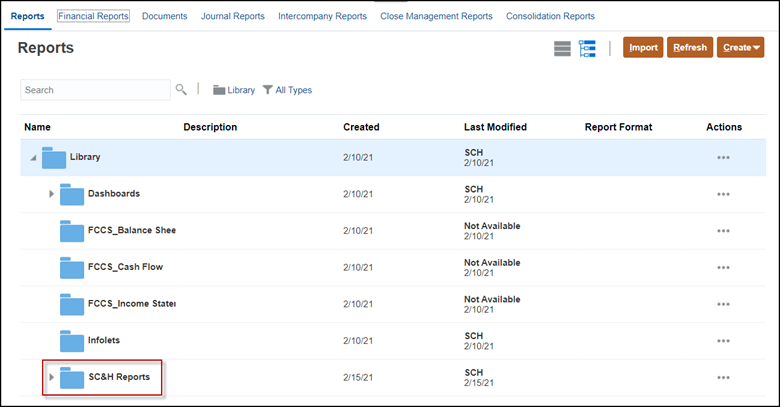 If you’d like to migrate only a select few reports, you may use the “Migrate” utility shown below. This method allows you to migrate individual reports to the new Reports module. One thing to note is that folders cannot be migrated using this method.

Similar to using the “Migrate All” utility, the migration utility will ask you to select a destination for the report you are migrating.

Once you’ve selected a destination for the report, you will receive a notification that the migration has completed successfully. The report should now be available on the Reports tab.

The final method to migrate your existing financial reports should feel familiar if you’ve migrated reports in the past. You may choose to migrate a report by importing its .des file. Click “Import” on the Reports tab.

After clicking “Import” you will be prompted to select the .des file to upload from your computer and select a destination folder for the report.

Once you’ve selected the file for import, the “Name” and “Description” fields will automatically populate based on the .des file, but you have the option to update either field.

Once you’ve filled out the prompts and clicked “OK”, you will receive a notification that the migration has completed successfully. The report will now be available on the Reports tab.

Another thing to keep in mind is that you will not be able to migrate existing binders. If you wish to utilize binder functionality, you may build binders that reference reports that have been migrated. In addition, the new Reports module does not allow reports to be run to Excel or via Smart View. Oracle has not yet released an estimate for when this functionality will be available in the new Reports module.

Finally, when running migrated reports for the first time, the run time tends to be a bit longer. Subsequent runs of these reports, however, have shown that the reports render in a similar amount of time as they did prior to migration.

We will take a deeper dive into some of the exciting functionality available in the new Reports module in subsequent blog posts, so keep an eye out, and until then, happy migrating!

If you have any questions or would like to learn more about migrating reports with Oracle’s 21.02 release, reach out to our team.