Named after a 19th Century utopian community, Modern Times Beer is repurposing the experiments of utopia – from the names of their craft brews to creating a less exploitative world for its employees; placing the brewery’s ownership in their hands. The San Diego based brewery is the latest craft brewery to become employee-owned, and the first in the state of California. The fast-growing brewer has joined the likes of New Belgium, Harpoon, and Left Hand Brewing by adopting an employee ownership structure. To make the transition from traditional corporate ownership, Modern Times retained a team of ESOP experts, including SC&H Capital, to support the Company’s recent ESOP transaction.

Modern Times opened its doors and beer lovers cracked open their signature cans and hybrid styles in 2013. Now, they distribute their popular beer across six states from their San Diego based brewing facilities and serve brews directly to their customers through taprooms across Southern California. The brewery produced 40,500 barrels in 2016 (an 82% increase in production from 2015), positioning the company close to an industry-significant production level of 60,000 barrels per year.

Reaching this level of production places the brewery squarely on the radar screen of large multinational brewers as an attractive acquisition target. However, an increasing number of craft breweries have begun to adopt an Employee Stock Ownership Plan (ESOP) model as an alternative to selling to a 3rd party.  ESOPs allow craft brewers to address key issues of ownership succession and liquidity while remaining independent and continuing to grow their brand. This was the route Jacob McKean, founder, CEO, and majority owner of Modern Times, chose for his company and his employees.

“Employee ownership isn’t just a trend. It’s a viable corporate structure, and for many shareholders and companies it can be a smart move,” said Gregory Hogan, Director at SC&H Capital. “More and more craft breweries are transitioning to ESOPs. For Jacob McKean, it was important to him to keep his company independent and to look after and reward his employees.”

SC&H Capital worked closely with Jacob and Modern Times team to implement an ESOP transaction that the company anticipates will result in:

McKean said of the transition, “[It’s] proof that a startup brewery can compete and win in the craft beer market without selling out, all the while taking outstanding care of our employees and rewarding our investors.”

“ESOP’s popularity is growing, for very legitimate reasons,” said Hogan. “Many craft breweries have seen the benefits and realize employee ownership can address, and answer, many of the challenges faced by growing companies.” 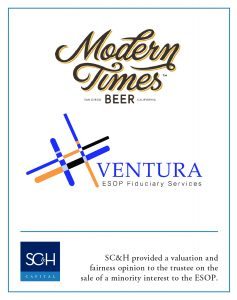