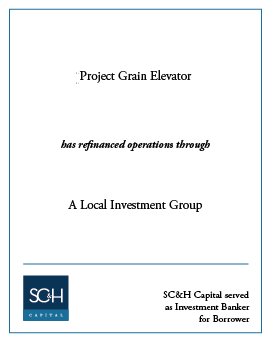 Project Grain Elevator – SC&H Capital was retained to find an investor, joint venture partner, or source of refinancing for this established grain elevator operation that included three locations and an intermodal rail hub. The existing lender did not want to continue to fund grain hedging and established a deadline for the company to pay off its existing debt, or the bank would proceed to foreclose.

SC&H launched an intensive international marketing effort and within several weeks received nine letters of intent that included entirety sales, joint venture partnerships and refinance proposals, all of which would make the existing lender whole and most allowed the owner the opportunity to retain equity in the company. The owner decided to move forward with a refinancing package which allowed him to pay off the existing lender by the established deadline and negotiate a joint venture relationship that made the most sense for him.