If you’re a U.S. company that’s a shareholder of foreign affiliates, then this could be a promising tax saving opportunity for you. This is especially true if your foreign affiliates are income-producing, which would subject them to Global Intangible Low-Taxed Income (GILTI) and position you to exclude certain income from U.S. taxation. Before we get into the specifics, qualifiers, and benefits let’s first understand how GILTI came into effect.

The Tax Cuts and Jobs Act of 2017 included the GILTI provision to denote the total active income earned by a U.S. shareholder’s foreign affiliates that exceeds 10% of the company’s Qualified Business Asset Investment (QBAI)—the average of the adjusted bases in specified tangible property.

On July 20, 2020, the IRS released final regulations on GILTI which address the application of the High-Tax Exclusion (HTE) of certain income from a U.S. taxpayer’s GILTI inclusion.

How Do I Know if I Qualify?

To qualify for the high-tax exclusion a U.S. shareholder may exclude from GILTI, the tested income of a CFC which is subject to a foreign Effective Tax Rate (ETR) must be greater than 90% of the current U.S. corporate tax rate. For tax year 2021, a foreign ETR of 18.9% or higher would satisfy this requirement (90% x 21% corporate tax rate = 18.9%).

How Do I Avoid Potentially Negative Impact?

To understand how the impact of the GILTI HTE election could negatively impact a U.S. shareholder, let’s assume the following: 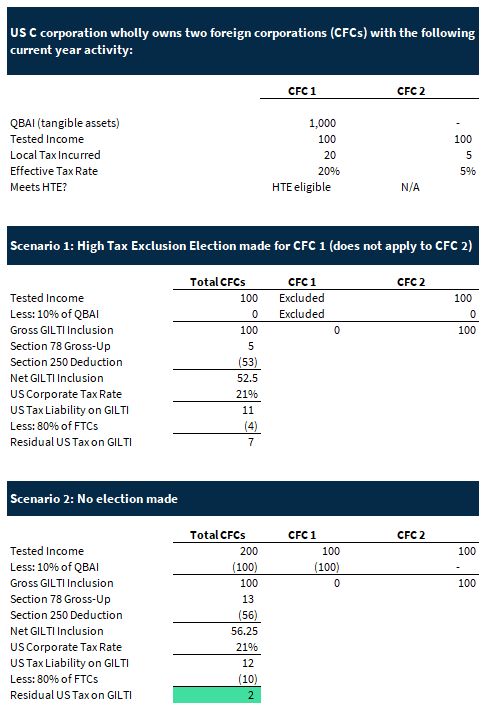 Generally speaking, it may be favorable to elect the GILTI high-tax exclusion so long as the QBAI of the high-taxed CFC(s) is not significant relative to the total QBAI of all CFCs owned by the US shareholder.

As shown in the example above, by making the GILTI HTE election and excluding CFC 1 from the GILTI calculation (Scenario 1), the associated foreign tax credits and QBAI of CFC 1 are also removed from the calculation, resulting in a residual U.S. tax due on the net GILTI inclusion for the U.S. shareholder of $7.

When compared to Scenario 2, where no GILTI HTE election is made, the QBAI of CFC 1 reduces the total tested income of all CFCs resulting in the same gross GILTI inclusion amount of $100 as calculated under Scenario 1. However, the foreign taxes associated with the GILTI inclusion are also available to offset the U.S. tax liability, resulting in a residual U.S. tax due of $2. When compared to the $7 of residual U.S. tax due under Scenario 1 (HTE was elected), the U.S. taxpayer would incur $5 less tax expense if they did not make the GILTI high-tax exclusion election.

What Are the Best Next Steps?

It is imperative that each U.S. shareholder fully assess the U.S. tax impact of the GILTI high-tax exclusion election before making the election each year. You’ll want to understand where your foreign affiliates are located, the local tax rate, and related financial data.

Talk with your tax advisor, or connect with our SC&H tax professionals, about doing an analysis of the previous tax year, exploring the benefits, and quantifying the data to help determine a favorable approach for your company.