Past Recession History Points to One Thing: Remain Steadfast to Your Strategic Financial Plan

During the course of 2021, we witnessed over 70 all-time highs in the S&P 500. For most investors, this meant a consistent stream of green arrows pointing upwards on their statements and nearly daily increases in the value of their portfolio. This led to a more relaxed, and optimistic view of the future.

Since the start of 2022, the arrows have unfortunately maintained a red, downward trend. This has likely made investors feel despondent, anxious, and far less optimistic about the future.

These declines have inevitably resurfaced the word that no investor feels at ease hearing—recession. But fear not, recessions are a naturally occurring phenomenon of a healthy economy as we’ll discover later in this article. They should be expected, not dreaded.

Capital markets are always forward-looking. They adjust their prices based on expectations about future profits. As such, once a recession is determined to have occurred, the markets have likely already priced in the subsequent profit decline of the underlying companies. Only additional negative news, not currently known by market participants, is going to send prices lower. So, spending your energy pondering the reasons behind the decline isn’t going to change the outcome and may even lead you to make short-sighted decisions.

An Evaluation of Recessions Past to Present

Since the founding of the United States, recessions have occurred about once every seven years. Let’s analyze a list of relevant facts about recessions that have occurred over the last forty years:

Given this data, a reasonable conclusion is that recessions occur at least once a decade and span less than a year. Most importantly, recessions are temporary and have no discernable impact on a long-term equity investor’s ability to realize an average annualized double-digit rate of return on their money.

A Financial Plan That Positions You for Success

Unfortunately, many investors are unable to maintain their resiliency during extended periods of market declines. They confuse a temporary decline in their capital with what they believe is a permanent loss. This leads them to sell their assets at precisely the wrong time for all the wrong reasons. They’ll justify their decision by telling themselves that they’ll, “buy back in when things get better”—which means they’ll be selling low and buying high, as prices will have rebounded.

As we can see from the chart below, not staying fully invested, even for just a few days during the year, is a sure-fire way to reduce your long-term returns. 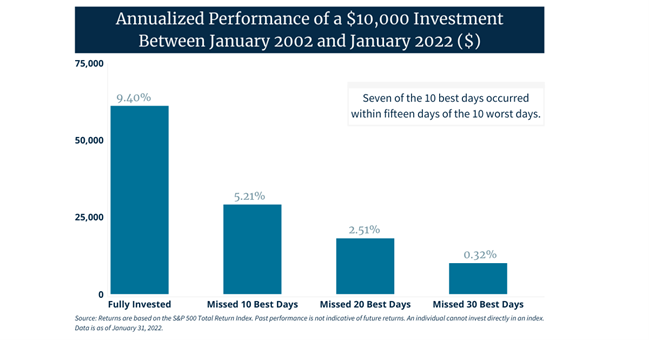 This is why having a financial plan and working alongside a qualified financial advisor is so important. It allows you to properly prepare for the next recession, not attempt to avoid it. A well-built financial plan will outline your short- and longer-term goals, combined with specific steps for how you’ll reach each one. It will also outline how your assets should be invested to ensure you’re owning the right mix based solely on the timing and cost of each of your goals.

When done right, your financial plan will be prepared for the next inevitable recession and corresponding bear market. Preparation and planning are the best antidotes to an unknown future.

For retirees or those retiring within the next few years, your plan should consist of cash reserves (e.g., short term investments) equal to no less than about two to three years’ worth of your spending needs. These assets will be used during time periods when it’s less than ideal to sell shares of stock (e.g., during a bear market in which prices have declined over 20% from their prior highs).

For those in the accumulation stage of their life, in other words those who are still adding to their retirement portfolio, recessions and temporary price declines should be viewed as a tremendous opportunity to add shares to your portfolio at ever lower prices. As the economy emerges from the last recession, stock prices resume their upward surge.

Since there are no facts about the future, the remainder of 2022 and beyond will only be known in hindsight. We’ve seen attempts to time the market, even for just a few days, can be detrimental to long-term returns for investors. Provided that we know recessions occur as part of a free, fully functioning economic system, a thoughtful financial plan will help you stay committed to your short- and long-term objectives. Investors who have such a plan, and who remember their history, are in a far better position to withstand the inevitable short-term market decline and realize far higher rates of return.

Have questions about the current state of the market or your financial planning strategy?

Reach Out to Us