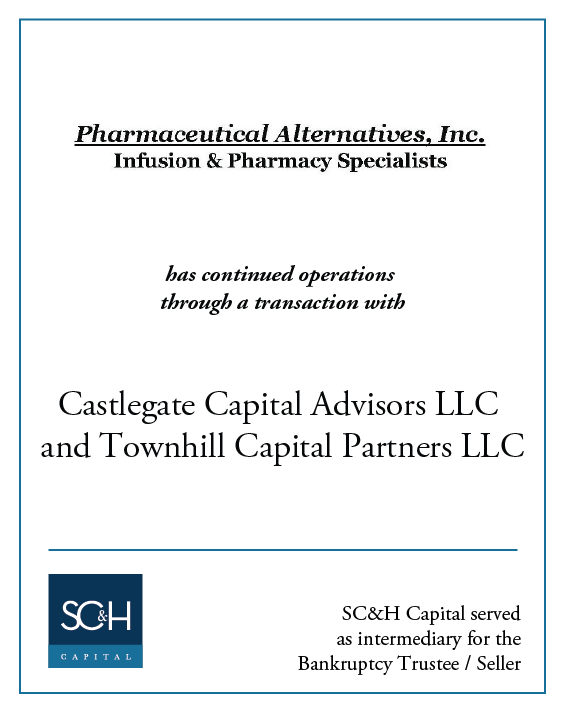 Pharmaceutical Alternatives, Inc. (PAI) – PAI tapped into the underserved home infusion therapy market in Ohio and surrounding states and quickly grew to over $32mm in sales. A substantial unpaid claim forced PAI to proceed with legal action against a large payor. The insurance company’s response was to simply stop paying any claims submitted by PAI. PAI continued to service the payor’s patients without being reimbursed, which put a huge strain on cash flow.  This cash flow crunch resulted in PAI having to off-load patients because they were not able to continue to purchase the pharmaceuticals required for the prescribed therapies. PAI then filed chapter 11 to allow time to reorganize, but continued cash flow restraints led creditors to convert to chapter 7. A bankruptcy trustee was appointed to shut down the company and oversee the disposition of the assets.

SC&H Capital was retained and quickly generated several offers that would reopen the company and allow it to operate as a going concern.  Through extensive negotiations, the highest value for the company was achieved and the business was sold to a strategic buyer.  PAI’s owner, management team, and employees were rehired, and the business was able to restart operations.