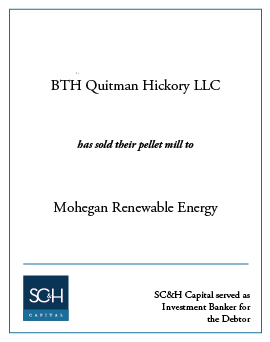 Cains Pickles, Inc. – Owned by Gedney Pickle, Inc. of Minnesota, this $50 million per year manufacturer of pickles, relishes, and other related items enjoyed the number one retail brand in New England but was losing money in its foodservice business and had announced that it was closing the South Deerfield, Massachusetts plant in sixty days. SC&H Capital was retained and spoke to the employees and to local cucumber growers to ask them to stay with the business as we attempted to sell it as a going concern.

Within two weeks of being retained, SC&H generated two offers to purchase the business as a going concern, including one from Oxford Foods, LLC, which was formed by four local cucumber growers and a past president of Cains. With offers and deposits in hand, the plant remained open. After receiving other offers, and much negotiation, Oxford Foods’ offer was improved substantially. SC&H also worked with the state and local economic development groups to help the buyer get financing. Oxford Foods acquired the foodservice business via an all-cash sale and assumed a 9-year lease on Cains’ distribution warehouse. Almost all employees were retained, and the plant continues to operate. Gedney kept the retail brand and consolidated it into its Minnesota plant.