Living to 100: Making Your Money Last a Lifetime

The Story of Esther Chapman, an SC&H Financial Advisors Client Who Just Turned 100

Esther Chapman has seen it all in her lifetime, and her story is amazing.

On April 8, 2017, she celebrated her 100th birthday, and holds the distinction of being Rob Schmitt’s oldest client. Rob is a Senior Manager with SC&H Financial Advisors.

“I’ve had a good life. A good husband, and a good daughter,” said Esther, who has been an SC&H client for the past nine years.

Esther is a good example of how careful financial planning at Rob’s direction has helped her preserve capital so she can live without worrying about the future. According to a recent survey by the Employee Benefit Research Institute, an independent employee benefits research organization, 12.2 percent of people who died at 85 and over had no remaining assets.

“With all the advancements in healthcare we are seeing people who are living longer, so when we sit down with clients we talk about longevity planning,” Rob said. “Having that balance between life expectancy and income needs from the portfolio are definitely an important element of our planning.”

Esther was born two days after the United States entered the First World War and grew up in a farmhouse in Sharpsburg, Md., with a Civil War cannon shell in its door.

In high school she saw Franklin D. Roosevelt deliver his first inaugural speech – “the only thing we have to fear is…fear itself.” She bought her first automobile in the late 1930s, a Plymouth sedan for $500, which she sold eight years later for $900.

After moving to Baltimore in 1950, she marveled as her husband, Jacob Chapman, an electrical engineer who died in 2009, helped develop a transformer for Neil Armstrong’s camera that went to the moon.

She celebrated her big day by “eating a lot of crab cakes” with her daughter, Nancy, and son-in-law, Mike, who drove to Baltimore from Au Sable Forks, N.Y., near Lake Placid. Esther’s long-time church, St. Paul’s Lutheran Church of Lutherville, threw her a small party to honor her for the milestone birthday.

Esther is a great example of how SC&H Financial Advisors forms meaningful, long-term relationships with clients.  The better we know our clients, the more we can help them meet their financial g 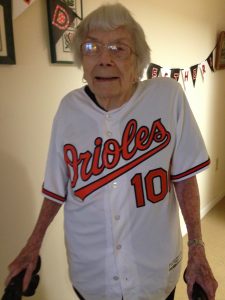 oals and properly plan for the future.

Rob took her to lunch shortly before her birthday and presented Esther, a devoted Orioles fan, with a gift she’ll never forget – an O’s jersey with her name and the number “100” on the back.

“She may be my oldest client, but she has an exuberance about her that I love,” Rob said. “Whether I’m calling to check-in, or if I stop by for a visit, she always makes me smile and laugh. She holds a special place in my heart.”

It was Nancy and Mike who brought Esther into SC&H Financial Advisors after an unfavorable experience with another firm.  They are also long-term clients of the firm.

Rob worked to create a financial strategy for Esther that has her living comfortably for years to come. Her returns are strong, and unlike others, she does not have to worry about outliving her income because it has been managed conservatively.

“Rob is wonderful,” Esther said. “I appreciate him to the nth degree.”

Esther credits her longevity to a glass of red wine every afternoon and a few pieces of dark chocolate. Now that Esther’s 100, she’s not looking to slow down. She said she’s already looking forward to her birthday next year, and another crab cake dinner.

Our team relishes stories like Esther’s. She embodies the kind of personal connection we like to develop with our clients and the care we take in planning for the future by recognizing that people are living longer.

“SC&H is proud to have such a distinguished and sincere client,” Rob said.  “We hope to continue helping her and her family for many years to come.”

If you have questions about retirement planning, or making sure you can enjoy a secure future for years to come,  please contact SC&H Financial Advisors by calling (888) 650-7502 or by filling out our form here.